The Municipality of Catania and the Harbor Authority Authority of the Eastern Sicilian Sea (formerly Port Authority of Catania), have long started a dialogue concerning the future of the port areas located in the area of ​​greatest contact with the city. The Port of Catania is a historic port and, as in other cases on the national and international scene, deeply inserted in the urban context of the city and specifically in the area of ​​the historic city center.
Within the framework of the Innovative Program in the urban area, promoted with the aim of resolving the major problems inherent in the relationship between city, port and railway facilities, the Municipality of Catania and the Port Authority Authority of the Eastern Sicilian Sea shared the need to have a planning tool at the masterplan level, which identifies the main urban, landscape, architectural and functional components of the area that goes from Piazza Europa to the south of the Biscari lighthouse, passing through piazza dei martiri and Cementeria. In this wide range, in fact, the main nodes and points of contact between the existing railway network and the Port with the city fall.
Nodes with problems stratified over time that, in the inexorable historical palimpsest, today represent some of the most important critical issues of the city in terms of the system of traffic, central places and residence.
The port / city integration area, consisting of the area between Piazza dei Martiri and the Biscari / Cementeria lighthouse, represents a discontinuous urban “disorder”.
Disused industrial areas, degraded residential areas, public vacuums, railway infrastructures of the territorial type, entrances to the metropolitan city, the headland area to the holiday resorts and the “sea”, areas with large empty public containers, need to be consistently ” a system “with the criteria of a planning discipline that is not directed only to the strictly urban requirement, but to the dimension
underground and large scale.
The various community programs, today, activate processes of territorial transformation of a punctual type, therefore it is considered very useful to program with a logical consistency the objectives and the most shared strategies.
Addressing the issue with a competition of international ideas opens up the prospect to innovative solutions, above all, discusses non-obvious disciplinary axioms and multidisciplinary analysis.
Creating a functional and territorial “concept” for a metropolitan city, in this context, means revitalizing the meanings of the port area in which to allocate the maritime station (one of the “architectural objects” to be defined), the clubhouse for the cruise and tourism sector , the abandoned areas of the Cementeria, the relationship between the city and the sea, the railway, metropolitan and mobility infrastructures. Important examples have been shown by the cities of Valencia, Lisbon, Lyon, with planned and coherent projects in reference to the short, medium and long term framework.
Given the importance of the areas referred to in this competition in the urban context of the city, the Port Authority Authority of the Eastern Sicilian Sea and the Municipality of Catania agree to entrust the latter with the role of Contracting Authority, without prejudice to the ‘AdSP, arising from the law establishing, on the port.

The Municipality of Catania, as mentioned in the introduction in agreement with the Port System Authority of the Eastern Sicilian Sea, announces a competition of ideas pursuant to art. 156 of Legislative Decree no. 50/2016, with an open procedure, divided into two phases in an anonymous form, aimed at identifying the best proposal for ideas for the “requalification of the urban waterfront of Catania”.
The competition of ideas aims to identify the most appropriate methodological solution for the urban regeneration of the area, through a Masterplan, according to the needs indicated in this announcement and in the address document (DI) attached to this announcement.
The explanatory level of the proposed ideas will be with disciplinary content of Architectural and Urbanistic type, it will not represent any level of planning as defined by the art. 23 of Legislative Decree 50/2016 and s.m.i.
The definition of the “MASTERPLAN” design level has no normative codification within the procurement laws, but instead finds confirmation on the applied urban planning (not on the Sicilian urban planning law) for the definition of a type of programmatic planning.
The objective of the competition of ideas is the definition of strategies, planning directions at urban and territorial scale for the redevelopment of the city and port waterfront in relation to the territorial context.

The MASTERPLAN will have to provide the methodological indications of urban and architectural rules for the requalification of spaces, placing as invariable principle the important role that the area plays in respect of the intrinsic characteristics of historical, artistic and cultural values.
The guidelines, provided to the participants, for the definition of the “planning and compositional” idea, the detailed description of the places, will be contained in the DI (Address Document) attached to this announcement and will form an integral part of it.
The project proposal will have to identify solutions related to defining:
• urban, territorial and landscape relations, between the urban, port and territorial systems of the area and the surrounding context, also in the specific characterization of “metropolitan city”;
• the functional and vehicular mobility, cycle and pedestrian mobility, and parking spaces;
• the meaningful idea on the identification of the idea of ​​the maritime station of the city of Catania, intended as a symbol and sign of recognition of the entire territory;
• the structure and the different characterizations of the public space;
• the eco-sustainability of the overall intervention;
• interactions with the smart-city and smart-connect techniques;
• a brief economic-financial feasibility of the interventions.
All this is aimed at identifying the best project idea that the civic administration and the Harbor System Authority of the Eastern Sicilian Sea will provide to develop in the following, with the appropriate planning phases provided for the current regulations.
The selected ideas will not constitute design level (as defined by Legislative Decree 50/2016 es.m.i.), but “methodological proposal”, useful to suggest later the contents of the projects to be implemented in the territory. 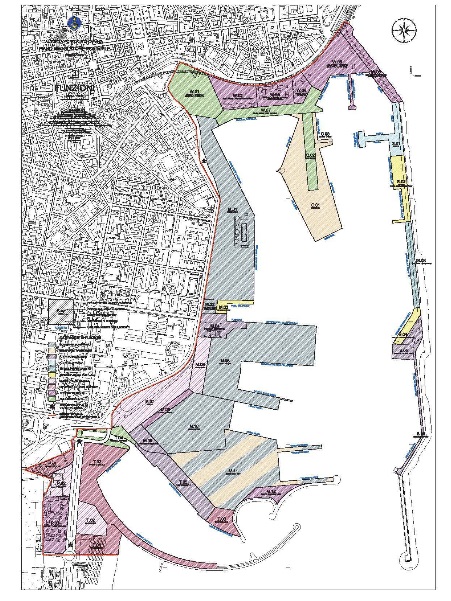 Venice to the World – Venice – Italy